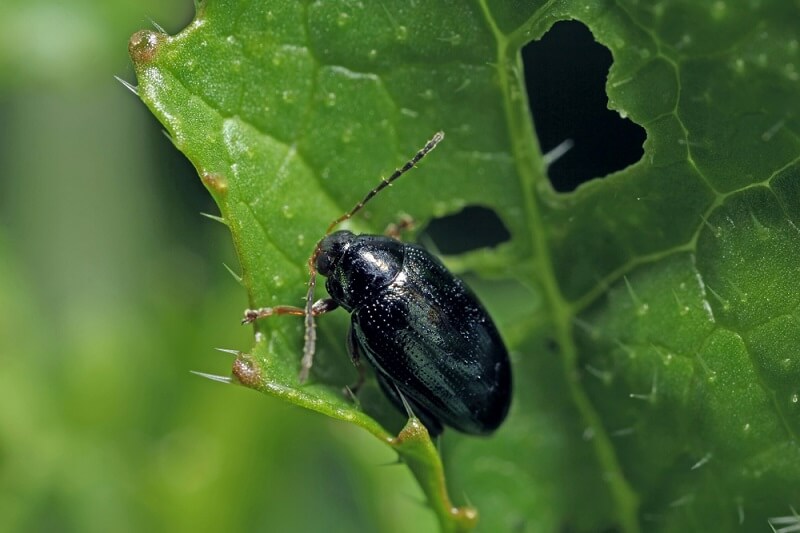 The first step has been taken towards developing a commercial lure to help tackle the devastating and costly damage caused by the cabbage stem flea beetle, Psylliodes crysocephala.

Following withdrawal of neonicotinoid pesticides from the market in 2013, cabbage stem flea beetle has rapidly emerged as the most serious economic pest of oilseed rape and resistance to pyrethroid insecticides has exacerbated this issue.

Damage is caused by both adults and their larvae, with most harm being caused by adults that migrate into crops during emergence, when the crop is most susceptible. Approximately 331,000 hectares of oilseed rape are grown in the UK with a market value of more than £700 million. It is estimated that annual yield losses are currently between 5 to 15%, which equates to over £35 million. Furthermore, lodging, which is caused by larval feeding in the stems can be extensive with losses estimated to be between £47 million and £120 million annually.

Initiated by Cheshire-based International Pheromone Systems, work has begun to identify any biological active chemical components which could be used to sensitively monitor for the pest both before and at crop emergence so that farmers are alerted to the presence of the beetle and can take remedial action if required.

The research is being carried out by students at Harper Adams University while the project is being managed by Crop Health and Protection (CHAP) - one of four UK Agri-Tech Innovation Centres.UK

Dr Sam Jones, Technical Manager for International Pheromone Systems, explains: “While there has been much interest in this pest during the past five years, a pheromone has yet to be formally identified and this is the logical first step in the process of developing a commercial lure for this important pest. This project will focus on identifying any volatiles such as a sex pheromone produced by adult beetles that elicit an attractive response in one or both sexes. If this is successful, future work will then shift to testing the volatile components in the field.”

“The identification of biologically active volatile chemicals would improve the monitoring of this pest, and may also form the basis of novel controls that could be used to reduce the damage caused by this species to oilseed rape crops - and that is where we hope this research may help.’

International Pheromone Systems offers a nature-based approach and specialist knowledge for natural and safe solutions to monitor and manage pests in agricultural and domestic environments.

The company’s highly skilled entomologists find solutions from nature itself. Together with universities, scientific partners and growers, the IPS team works to find natural solutions to help reduce pesticide use and support integrated pest management (IPM) in agriculture, horticulture and forestry businesses.

A healthier, safer and more productive environment is achieved by using the natural behaviour of pests and finding the right pheromone combination and trapping solution specific to a particular species.