Muscid flies and blowflies can be unhygienic, irritating and an all-round general nuisance. The most common culprits are the Common Housefly, Musca domestica and the Green and Blue bottle flies. During the warmest months of the year, populations of these flies can rapidly explode.

Muscid flies and blowflies can be unhygienic, irritating and an all-round general nuisance. The most common culprits are the Common Housefly, Musca domestica and the Green and Blue bottle flies. During the warmest months of the year, populations of these flies can rapidly explode.

Development from egg to adult can take as little as seven to ten days and there can be up to 20 generations in a single year in the warmest climates.

The Blue bottle fly is appropriately called Calliphora vomitoria , which alludes to its favourite practice of regurgitating food before ingesting again, which helps it with digestion. It is no surprise then that they commonly carry disease-causing organisms, both for humans and domestic animals.

Muscid and Calliphorid flies are commonly encountered around bins and manure heaps; these stinking resources provide them with sufficient nutrition and the perfect conditions for development of the larval immature stage. Unpleasant aromas are so enticing to these flies that certain plants, such as Common Hogweed, Heracleum sphondylium , produce similar odours to induce them to act as pollinators.

Management of these pests is most important in food production facilities, animal husbandry units, and public spaces with numerous litter bins, where populations sizes can become unbearable if left unmanaged. The use of insecticides should be considered a last resort. Instead, a range of nonhazardous products are commercially available for controlling these pests, each with their own advantages and disadvantages.

Typically, people use sticky boards and sticky rolls consisting of large card boards or thin plastic rolls coated in a thick layer of a tacky adhesive. These products are best suited for use indoors or in non-dusty environments. In straw-filled cattle sheds these products are rapidly rendered ineffective as the glue surface becomes coated in dust.

A more suitable, and in my opinion, more effective solution, is the humble bag trap. This consists of a plastic bag with a lid containing a funnel entrance. Into the bag is added a powder attractant and water and the fermenting mix attracts flies into the trap through the funnel. Once in the trap, escape is very difficult, and the flies eventually drown in the pungent mixture. Each bag trap is capable of capturing thousands of flies within a few weeks.

The main issue encountered with bag traps is the length of time it takes before efficient attraction begins. Usually a few days to a week in sunshine is required to kickstart the fermentation process and produce the odours attractive to the flies. It was therefore of great interest to us to somehow develop a powder attractant that, when mixed with water, begins to attract these insects within a day or two.

Following research, we identified a variety of attractive components that could be included in the powder mixture. Two different mixtures were proposed, which we identified as “Formulation C” and “Formulation L”. In total, four formulations were tested: C, L, our current standard and a market leading product: The Red Top Fly Catcher System. Three farms were chosen as test sites from a selection who responded to an advert placed in the Farmers Weekly magazine: A cattle and poultry unit in Buckinghamshire, a pig farm in Gloucestershire and a farm rearing turkeys and cattle in Norfolk.

At each site the four different formulations were tested, using the same trap for all types. Between eight and sixteen traps were installed at each site and the trials were carried out over an 8-week period. To determine performance, the total height of all the fly carcasses caught in each bag was measured and recorded. This was initially carried out at days 1, 3 and 5, to establish the speed of performance before switching to weekly checks for the remainder of the trial period. We were very lucky in that there was a heat wave throughout the summer months presenting us with a bountiful supply of flies; If bag traps could be shown to successfully control fly numbers under these conditions then it wouldn’t be a stretch to conclude that this is a suitable pest management solution for most locations during an average British summer! 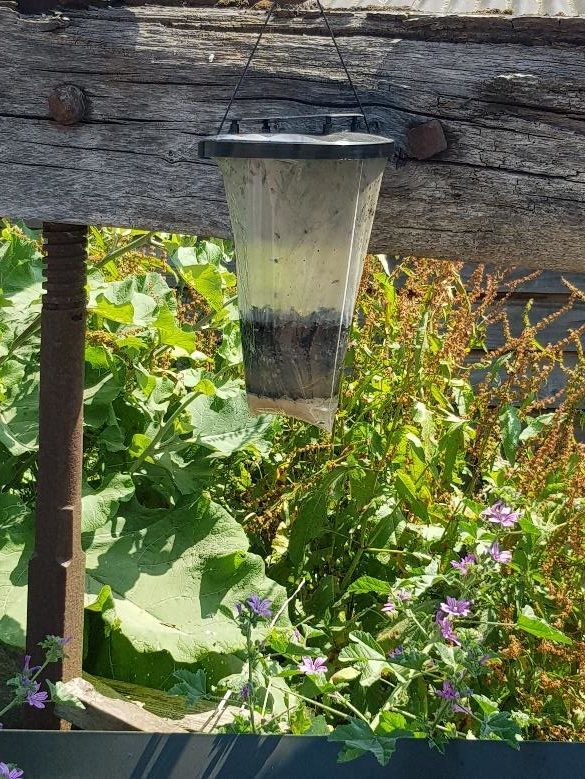 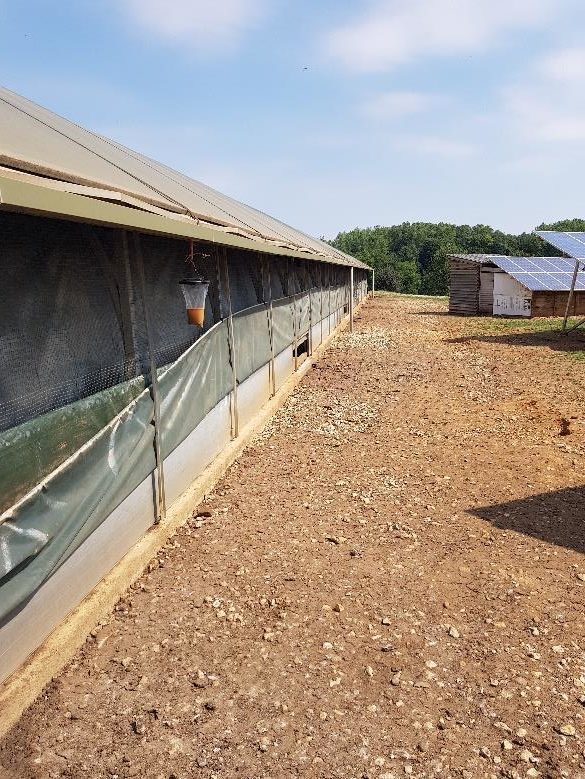 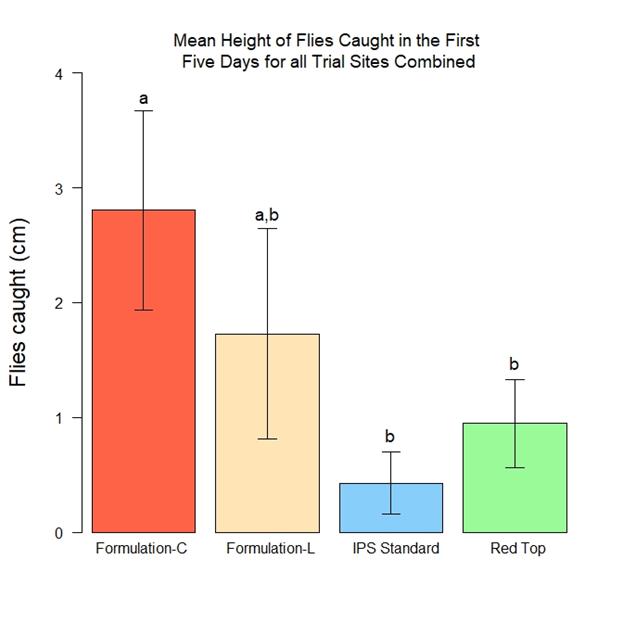 Mean height of flies caught in traps containing the four different attractants. The error bars indicate the standard error of the mean (variance) while the letters above the bars signify whether the different attractants differ from one another in performance. If the letters are different then this denotes a significant difference in performance so in the above figure only Formulation C performed significantly better than any other formulation (outperforming IPS Standard and Red Top). 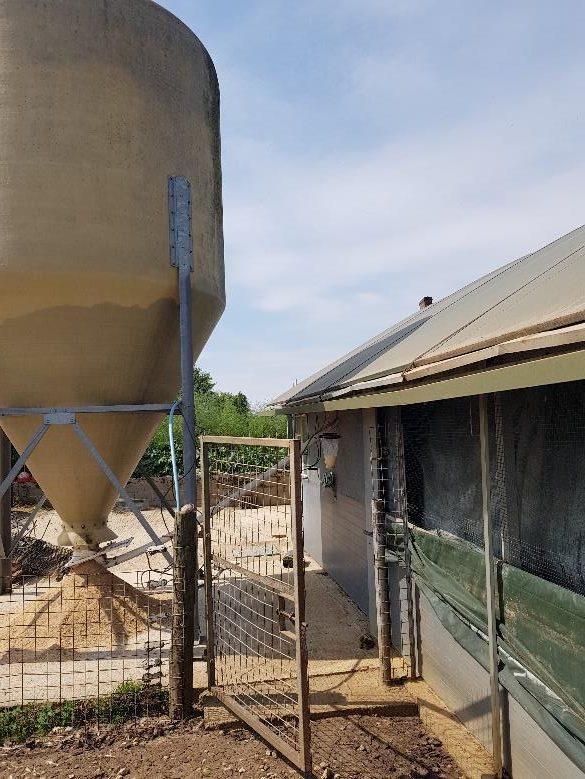 This figure shows the mean increase in height of flies caught in traps over a four-week period for the three individual farms and combined. After two weeks the new formulations, C and L, begin to catch many more flies than the Red Top and IPS Standard attractants. 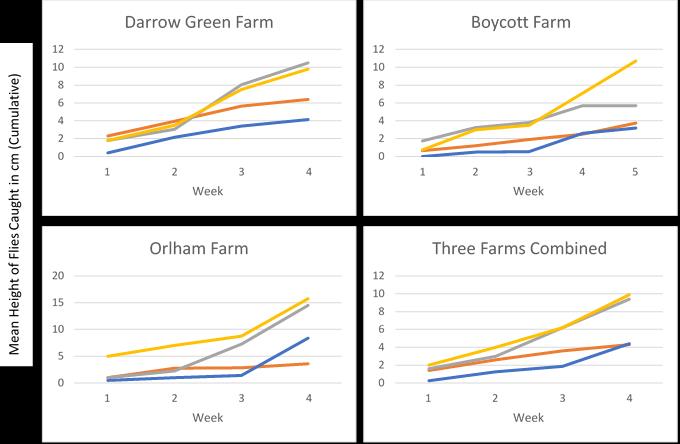 There is a clear improvement in performance in the two new formulations. Following completion of these trials we are now able to offer a much-improved product that is fast working and extremely effective over a four-week period. All farms reported a significant reduction in fly numbers. Indeed, the owners of one farm were keen to inform us that fly numbers in the kitchen and café were the lowest that they could remember and used our traps to minimize fly numbers during a family wedding. So, if you have issues with fly infestations outdoors and are in desperate need of an effective management solution that works, please contact our friendly Customer Services team who will be able to provide more information and prices.